Continuing with Town’s 2011/12 F A Cup exploits and having seen off Newcastle Town in the First Qualifying Round Morton Titterton’s side faced a particularly daunting challenge in the next round away at Stafford Rangers.

In their time the Rangers had been one of the top Non League clubs in the country, and although they were no longer at that level having just been relegated from what is now National League North into the Northern Premier League they were still two levels above Town and therefore firm favourites to ease into the next round.

And at half time it all seemed to be going as expected as the Rangers led 1-0, but in arguably their best ever 45 minutes of F A Cup action Town turned in a genuine giant killing performance to leave the once mighty Rangers stunned and not a little embarrassed.

Yet almost unbelievably Town have not won an F A Cup tie since.  They went out to a late goal at Kings Lynn in the Third Qualifying Round which will be featured next week, and in the five campaigns since Tividale, Tipton Town, Blaby and Whetstone, Coalville Town and most recently AFC Mansfield have all ended Town’s interest at the first time of asking.

Let’s hope that sequence ends in the coming season, and meantime enjoy reading about an afternoon which few who were there will ever forget.

This is surely what dreams are made of as Town pulled off one of their most impressive results ever at Marston Road on Saturday.  Trailing at the break they turned the game round  with a second half performance brimming with character and commitment to ultimately outbattle Stafford Rangers  –  who operate two levels above Town in the non-league pyramid  –  and secure a place in the Third Qualifying Round of the F A Cup with Budweiser for only the third time in their history.

In their time the Rangers have been one of the top non-league clubs in the country winning the F A Trophy twice in the 1970’s, and having progressed to the Second Round Proper of the F A Cup as recently as 2006, but they have struggled recently and following relegation from Blue Square Bet North last season went into this match lying 14th in the Evo Stik Northern League Premier Division with 13 points from  12 games.

They had however notched their best result of the season so far in midweek with a 1-0 away win at table toppers Northwich Victoria.

Town meanwhile had a pre-match boost with the news that they had picked up the MFA’s Moldwell Products Team of the Month Award for September with their heroics against Newcastle Town in the previous round no doubt being a contributory factor.

And Newcastle Town had a bearing on this match as well as their previous manager Greg Clowes and most of  their players had moved from Newcastle to the Rangers during the summer and formed the basis of the Rangers team here.

Sam Alsop was once again being a late withdrawal due to his knee problem but with Richard Morris reporting fit Town’s starting line-up showed only one change from last Saturday with Nick Pollard coming in for the unavailable Liam Reynolds.

Town made an encouraging start with the lively Mykel Beckley working an opening after cutting in from the left but firing well over, while at the other end Morris was soon in action as he punched out a left wing corner only as far as Dan Skelton who hit it first time but fortunately straight into Morris’s midriff.

The Rangers were looking to attack Town along the flanks and particularly down the right where the speedy Rob Stevenson has far too much pace for Ricky Baker.   An early foul brought the Town defender a yellow card, and inevitably it was Stevenson who was responsible for the Rangers going ahead in the 16th minute.

Once again he left Baker trailing, and as the unfortunate Andy Gregory tried to intercept his whipped-in centre it ricocheted off him past the bewildered Morris into the net.

And Town’s problems increased shortly after when Danny Haynes limped off with a hamstring problem with Joss Holford taking over at right back.

Beckley responded with a couple of promising runs down the left before being crowded out and Chris  Murphy was getting into some useful positions in midfield, but the Rangers had clearly done their homework on dangerman Ben Mackey who was being tightly marked by Luke George, and Town seldom looked like testing the Rangers keeper Danny Read.

Instead it was Stevenson who continued to make the most of the time and space he was allowed on the right, and on the half hour mark he sprinted past Baker for seemingly the umpteenth time and squared the ball to Chris Budrys whose close range effort was kept out by a reflex save from Morris.

Mackey at last had a shooting opportunity on 35 minutes when Gregory headed on an Adam Cooper free kick but Ryan Dicker was quickly across to snuff out the danger, and it was the Rangers who continued to have the better of the possession with Gregory and Cooper having to use all their experience to keep Town in the game.

And having had much the best of the first half the Rangers almost doubled their lead in the final minute when Stevenson once more went clear down the right to cross into Town’s penalty area, but Jon Sheldon failed to get enough power into his finish and the relieved Morris was able to save going to his right.

Town could hardly complain at being behind at the interval, and lived dangerously after the restart with both Baker and Holford being forced to clear threatening centres over their own crossbar, but gradually they settled down and Morton Titterton then made what turned out to be a match-changing substitution when he replaced Beckley with the greater physical presence of Josh Blake.

But even before the change had time to work Town equalised.   Pollard was the provider by getting down to the byline on the right and his cross went behind both Blake and Mackey to reach the unmarked Murphy 10 yards out who swivelled to hit a crisp right footer well beyond the helpless Read.

Suddenly it was a different game with the Rangers defence looking increasingly nervous as Town got a grip in midfield while Blake’s persistence made more room for Mackey, and in the 65th minute Town silenced the home supporters by taking the lead.

As Mackey cut in from the right he was bundled over by Skelton but Murphy was first to the loose ball and slipped it back to Mackey who picked himself off the floor to unleash a rasping left foot shot from 20 yards out which rocketed past Read into the top corner of the net.

The Rangers immediately made a double substitution which surprisingly   –  and  much to Baker’s relief   –  included Stevenson being replaced,  and their fresh legs certainly gave them a bit of  momentum..

Morris just about guided a Glynn Blackhurst effort from distance round the post, and the tie was once again evenly poised when the Rangers equalised with 15 minutes to go.

Stuart Herlihy gave away a free kick on the halfway line which was launched into the penalty area by Paul Donnelly and after Michael Morton had his shot parried by Morris the ball broke to fellow substitute Alan Nagington who forced it past Morris from a narrow angle.

Getting back on level terms seemed to give the Rangers added impetus but Morris comfortably held a Budrys header before only being able to watch as a long range effort from Morton thudded against his left hand post and away to safety.

Perhaps with the idea of hanging on for a replay Morton Titterton withdrew Pollard and sent on the more defensively minded Karl Fellows as the Rangers final substitute Neville Thompson began to worry the Town defence with a couple of menacing runs down the left.

But this was the F A Cup and this tie wasn’t all over.  With three minutes left the Rangers  defence failed to deal with a Herlihy cross from the left and Mackey drilled the loose ball back into the six yard box where it was turned in by the predatory Blake to put Town in front again.

And with the Rangers piling forward in a last desperate attempt to avoid being on the wrong end of a Cup upset Town amazingly added a fourth in the final minute of normal time.

Mackey was again involved as he picked up a clearance on the right touchline and expertly turned past Donnelly to cut into the penalty area where his shot rebounded off the bar and Fellows followed up to loop a header over the stranded keeper into the net.

The four added minutes seemed never ending as the Rangers desperately sought to repeat Town’s miracle reprieve at Newcastle a fortnight ago but at last the referee blew the final whistle and the celebrations for the travelling Town faithful could begin.

Morton Titterton and his players left the pitch to a rapturous reception and their run in this famous old competition this season is almost becoming fantasy.  In five matches they have netted a scarcely believable 24 goals, and with a favourable draw on Monday there could well be more to come. 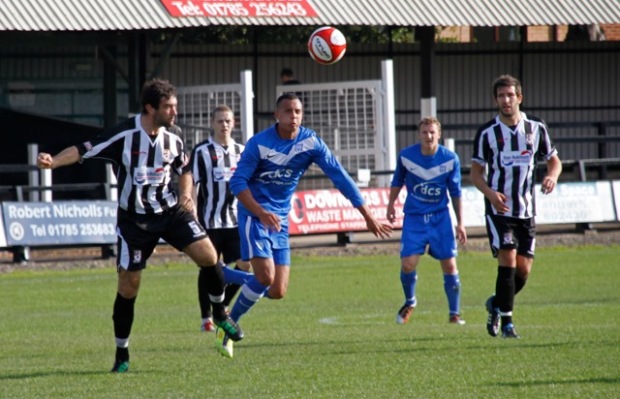 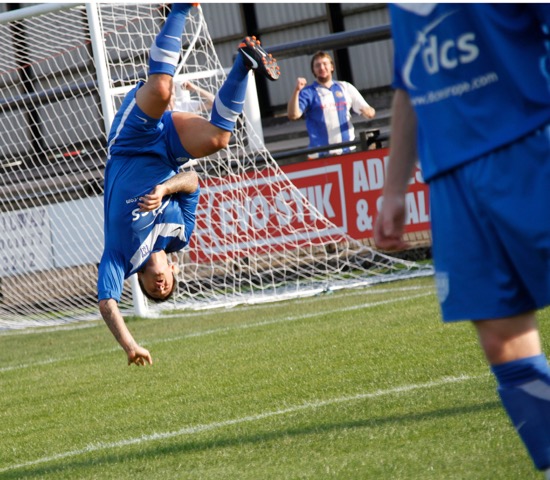 …and celebrates in style

The fans and officials celebrate

“We had a poor first half.  We showed them too much respect and allowed them too much time, but we put that right after half time and I thought that we were terrific from then on.  Josh Blake made a huge difference when he came on as he played closer to Mackey and was able to combine with him to put pressure on their defence, but the whole squad was absolutely magnificent and I’m proud of them all.

And what really pleases me about this result is what it means for the Club.  There are so many people who put in a tremendous amount of work to keep the Club going, and afternoons like this are their reward for all their efforts season after season.”