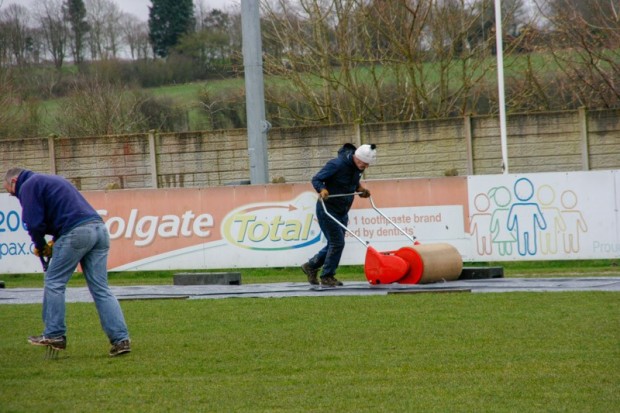 “Mark Bickley does a tremendous job” was the first reaction from Paul Davis afterwards.  “He took the covers off the pitch on Thursday night to let it dry then put them back on again on Friday morning.

There were a number of volunteers who assisted him do that and when I got here at half past twelve this morning there must have been at least ten people on the pitch helping out.

I phoned Mark yesterday morning and said the players really want to play Saturday but  when we  left after training on Thursday night it was wet and the game was very much in doubt  and it’s all down to Mark that we played today.

You can’t run a club at this level without volunteers.   Ours have been tremendous  and there wont’ be a club in this country in non-league football that’s done what we’ve done today to get this game on.

I asked them what they wanted and they said just get the three points and that’s what the players have done.

I told the players before the game that whatever happens we must win this afternoon for the volunteers and also to give us a platform for the rest of the season.

We started on 11th August and it’s now February and we haven’t had back-to-back wins or clean sheets until now.

I watched Redditch last week and they’ve improved since we played them last month so I knew we would be in for a tough game .

Two months ago would we have won that game today ?  I’m not sure but we’ve got far greater commitment in the squad now.

We’ve taken ten points from our last six games and that’s mid-table form.   Our aim is still to be fourth from bottom or better to guarantee safety and  to do that we need nine more points.

But from where we were we’ve turned a bit of a corner and I feel we’re on the up.”