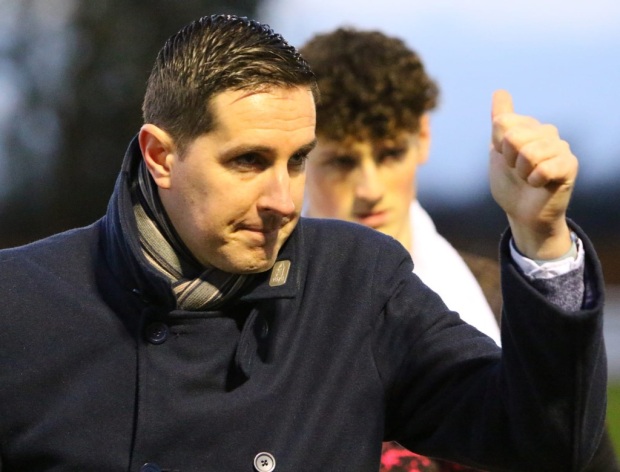 “Last year’s game here was similar with a 0-0 scoreline and again this afternoon was not a great spectacle but for us it was a great result”  beamed a happier Paul Davis afterwards.

“I said to Dale Belford early in the second half that neither team had really got going and were just waiting for a mistake or a set piece or a bit of quality and I’d have taken another 0-0 at that point.

Then the bit of quality comes from Courtney Richards and I’m really pleased for him as he does a lot of work off the ball so to grab his goal and for it to be the winner was special.

And it was also important to keep a clean sheet.  I thought we defended really well after we went 1-0 up and I don’t recall James Pardington having to make a save after that.

Michael Townsend made a massive difference. He’s got a real presence.   He talks and commands  and Kyle Rowley next to him was tremendous as well.

Another to make a difference was Rob Thompson-Brown when he came on and he drew the foul which led to the goal.

We’ve been getting there for a long time and it’s nice to walk off the pitch with the win.  I’m not sure we deserved to win today but sometimes recently we have definitely deserved more from games and not got it.

I think we edged it in terms of chances with most of their shots being from long range, and I’m sure that our efforts over the past few weeks deserved this result.

We’ve now got a fortnight off so it was important to go into that fortnight with something and I’m pleased that we go into it with four points from two games.”