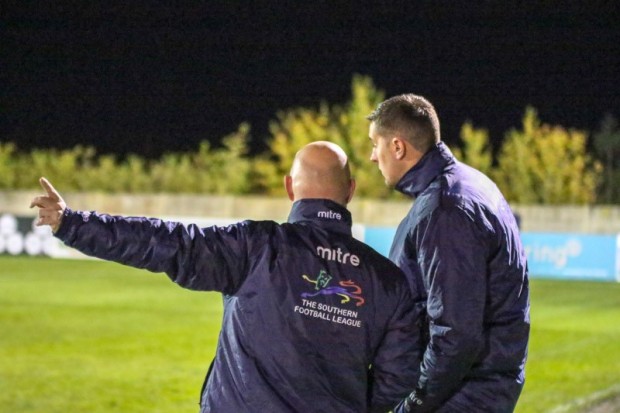 “I thought that we started the game well” reflected Paul Davis afterwards.  “I had given our lads instructions on how Hednesford would be.   I regard them as a big Northern team that go big early are relentless  and make you defend for ninety minutes.

They was exactly the case when I watched them although they changed their shape slightly tonight playing with a diamond in midfield and just had runners from everywhere..  That suited us as it was all down the middle of the pitch and I felt that we could deal with it.

So our players executed everything I asked them to do really well and we went ahead with Ravi’s wonder goal and then I thought that we dealt with them until their equaliser.  Dan Vann was convinced that he was fouled as the corner came across but nothing was given.

Nevertheless at half time we felt reasonably content.  We were still very much in the game but for the first fifteen  minutes after the break we  were as bad as we’ve been since I ‘ve been in charge.

We couldn’t get to grips with them and then the keeper who had done well all night made a mistake and they score what turned out to be the winner.

And that’s what happens. When you make mistakes against good teams they will score.

In my first game as caretaker against Lowestoft I said let’s be expansive and let’s be creative.  we  created 19 chances in that game yet lost 3-0.

Since then I’ve wanted us to be bit more solid and that’s been to the detriment of us going forward so we’ve now got to find the right balance where we can cause team problems while at the same time the defenders and the holding midfield players get the protection they need.

That takes time but I’m convinced we’re going in the right direction.   We’ve got to start our season somewhere and there’s no reason why it can’t be at Peterborough on Saturday.

Kyle Ambris will be back for that one as his suspension was only for one game while I was pleased with Kai Woollard-Innocent as I felt that we needed strengthening at left back.

So I believe we’ve got a good enough squad.  Other clubs are looking at our players and in the last few weeks seven day approaches have come in for Kairo Edwards-John, Ross Oulton and Nabil Shariff but they’ve all decided to stay with us.

They are all putting in the effort and I just want them to win a game of football.  Hopefully that will be this weekend.”