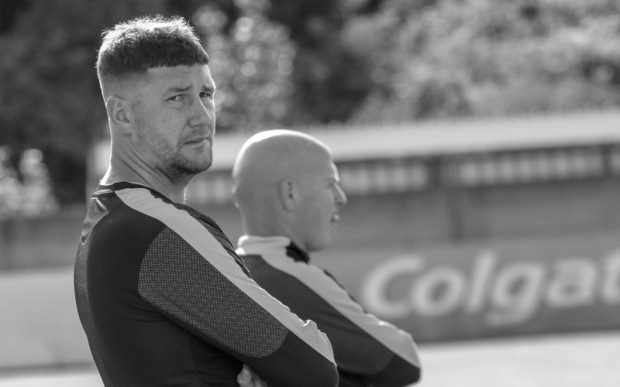 “I keep saying the same things and it’s getting boring  and all I can do is apologise”  admitted a downbeat and frustrated Tommy Wright after seeing his side slip to defeat against the Waders.

“Ultimately the performances which we put in on Monday and again today weren’t good enough.  We work on things in our training sessions and I keep expecting an improvement but  nothing’s happening so I have to take responsibility for it.

A week ago we beat Rushden so I know we’re capable but on Monday we huffed and puffed and didn’t defend and it was the same today    Three or four of us weren’t at the races and I can’t remember us testing their keeper at all.

For the opening ten minutes we looked decent but from then on we were flat. The penalty gave us a lifeline that we didn’t deserve and we then gifted them the equaliser inside a minute.

Chris Wreh didn’t start today as he looked jaded on Monday and also at training on Thursday and Nabil was champing at the bit to return.  And similarly with the keepers   –   Elliott did well on Saturday but less so on Monday  so I made the change.

A couple of new signings are on the horizon.  We’ve made a couple of approaches and had a couple of conversations but nothing is definite yet.

Maybe I’ve been too loyal to one or two but we’ve got Luis  Morrison and Linden Dovey coming back for next week which will help us at the back and give us a bit of experience as something’s missing at the moment.

We mustn’t be too glum.   We’ve got more points than at this time last year but we are too inconsistent and we need to remedy that quickly.” 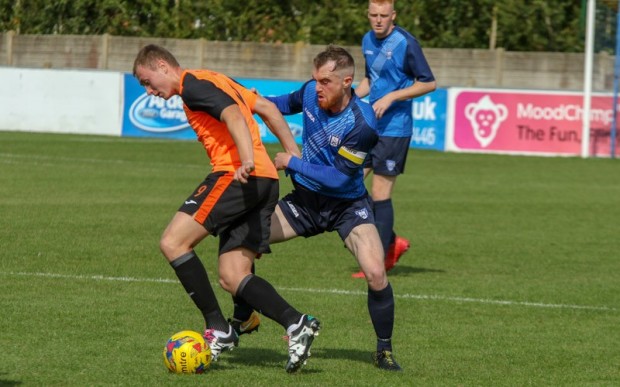 Just a week after ending Rushden and Diamonds  100% record  Town turned in a lifeless performance to slip to a deserved defeat against the Waders.

A full report is available under the First Team Match Reports Section.

A spectacular strike from 15 year old Jamie Spiers early in the second half propelled Nick Ballinger’s new look Town Youth side to their first MFYL Southern Premier Division win of the season in a closely fought encounter against Evesham United at the Arden Garages Stadium on Thursday evening.

Spiers’ moment of magic topped off a battling Town performance against the hard working Robins with Michael Boyd and Rob Singer in eyecatching form when Town pushed forward while at the back skipper Rob Sone was unruffled throughout and there was an accomplished display from another 15 year old in keeper Callum Monaghan.

It was soon evident that this was going to be a game between two evenly matched teams, and neither goal was seriously threatened until the half hour mark when Evesham’s Sam Butler drilled in a well struck low drive which was turned behind by Monaghan getting down well at the foot of his left hand post.

Town responded with Boyd working his way to the byline down the left only for his cross to be deflected behind before the Robins finished the half with a bit of a flourish as a Henry McMahon shot fizzed inches wide followed by Chris Lewis having a shot rebound off a Town defender and then Monaghan beating away another decent attempt from the lively McMahon.

But it was Town who were immediately into their stride after half time with Singer having a fiercely hit drive safely held by Evesham keeper Will Phillips before the Robins then wasted the best chance of the evening so far in the 55th minute to take the lead.

McMahon cut in from the right to square the ball across to Butler who could only screw his shot well wide and how costly that miss would prove to be was emphasised a couple of minutes later when Spiers received the ball some 25 yards out.

Spotting that Phillips had strayed off his line he let fly with a superbly struck effort which soared over the keeper and then dipped under the bar into the net.

The Robins tried to hit back straightaway but Monaghan pulled off another full length save to deny Lewis and with the game now far more open only the legs of Phillips at the other end prevented Boyd putting Town two up.

With a quarter of an hour still to go Oliver Whelan surged through before being brought down on the edge of the Town penalty to give the Robins a free kick in a particularly promising position but it was blazed a long way over and their last real chance of an equaliser had gone.

Showing admirable composure Town saw the game out to secure the win which will surely give them just the confidence boost they need when they travel to Bromyard Town for the F A Youth Cup Preliminary Round tie on Monday evening.

In the draw for the First Qualifying Round of the Emirates F A Cup made this morning Town have been handed a home tie against old rivals from their MFA days in either Stourport Swifts or Boldmere St Michaels.

The tie at the Arden Garages Stadium is scheduled for Saturday September 7th with a 3pm kick off.

Swifts and the Mikes fought out a goal-less draw at Stourport on Saturday and are due to replay at Boldmere on Monday September 2nd but bizarrely before then they are also due to meet each at Boldmere in the equivalent round of the F A Vase this Saturday.

The winner of the August lottery draw £100 prize was Roy Craddock. Congratulations Roy. A full list of monthly lottery winners and details of how to join can be found at https://stratfordtownisa.com/stisa-lottery/ 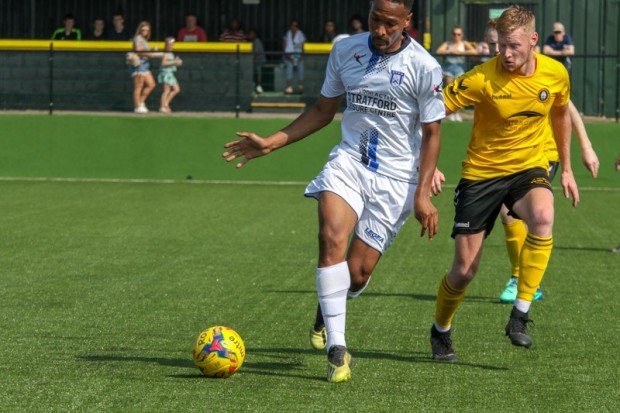 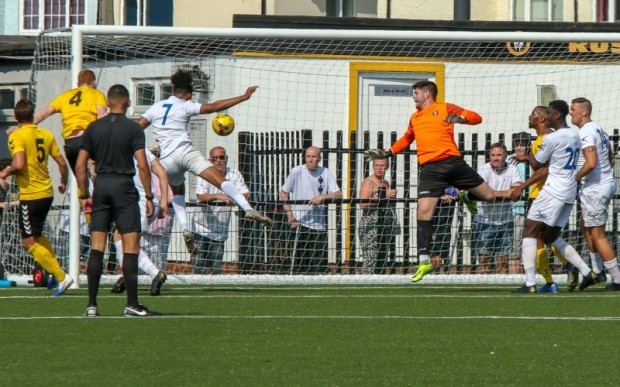 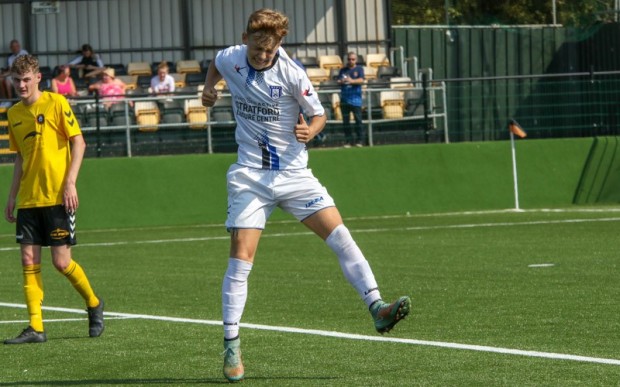 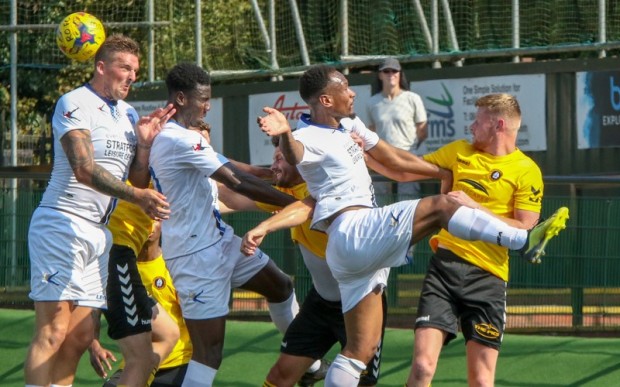 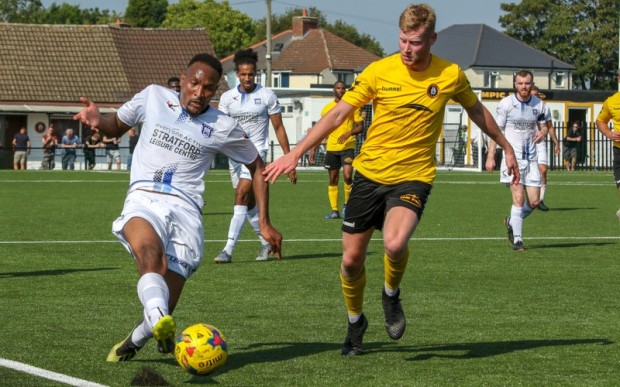 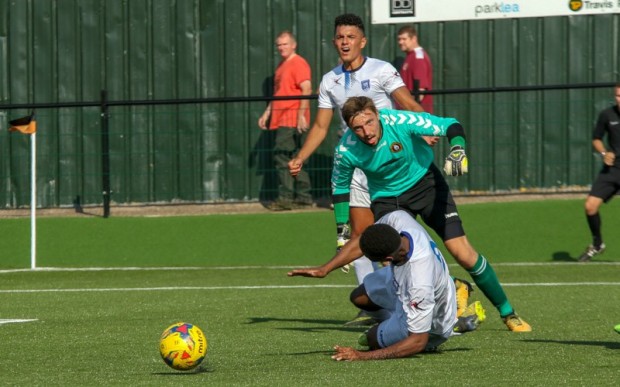 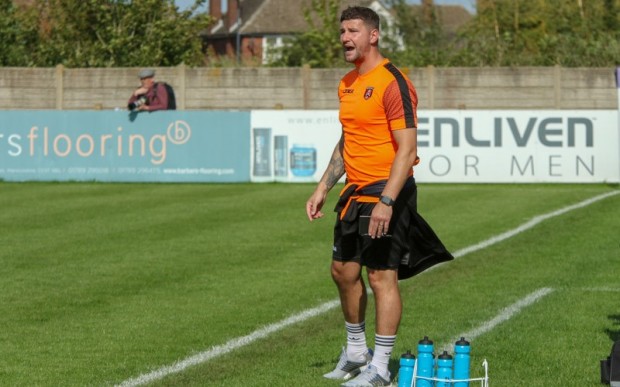 “We created enough chances to get something from the game”  reflected a disappointed Tommy Wright  ” that’s the positive  from the afternoon but defensively something’s got to change.

It’s the basics of defending that we’re not doing.   We didn’t show enough desire to keep a clean sheet and I was particularly disappointed with their first three goals.  The first was a header from a corner, the second had two of their players on their own in our six yard box and the third was from a throw-in.

They took their chances with some clinical finishing and we didn’t.   We probably should have had one before they scored as our lads all thought Nabil’s header was over the line, but every time we’ve had a positive spell they’ve scored.

That’s what good teams do  –   they weather the storms and come back.

To be honest with you I think they edged it today but it certainly wasn’t a 4-1 game.  They scored when it mattered and goals change games but if we had lost 4-3 I wouldn’t be feeling any better.

I think we need one or two new players to improve the depth of the squad, and if one or two come in then one or two will leave but that’s the way it is.  I’ve got high standards and we’ll get it right on the training pitch.

It’s been two hard fixtures.  We thought we were capable of getting six points although we would have been happy with four, but you can’t defend like we’ve done and expect to get results.”

The Pics scored at crucial times to continue as League leaders with Mitchell Glover on target for Town on a sweltering afternoon at Dales Lane.. 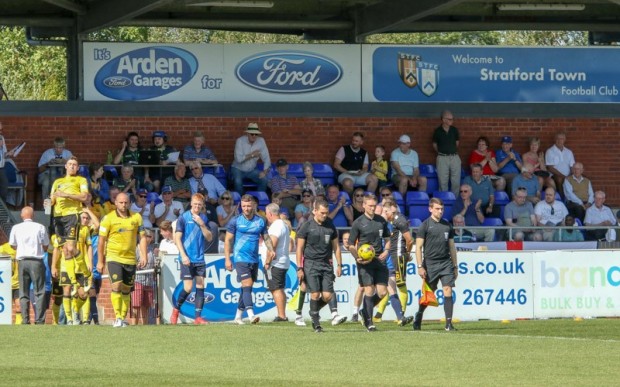 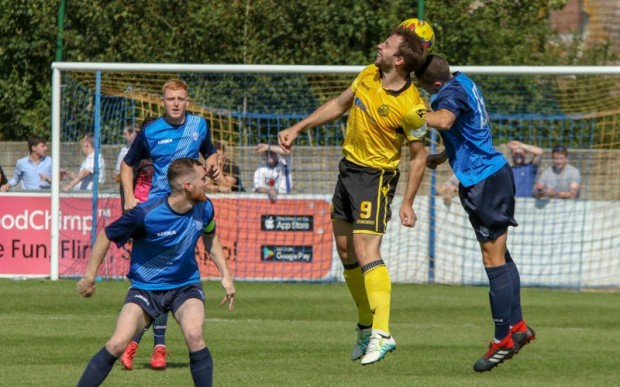 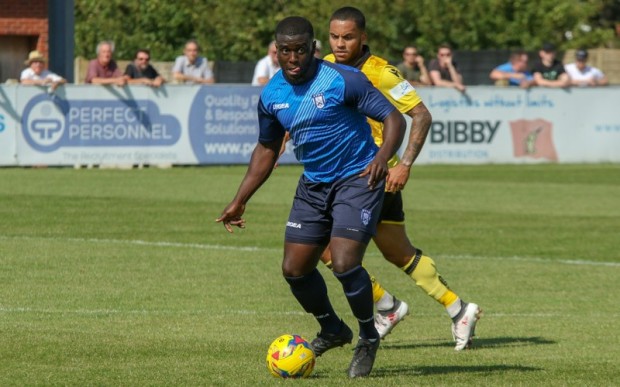 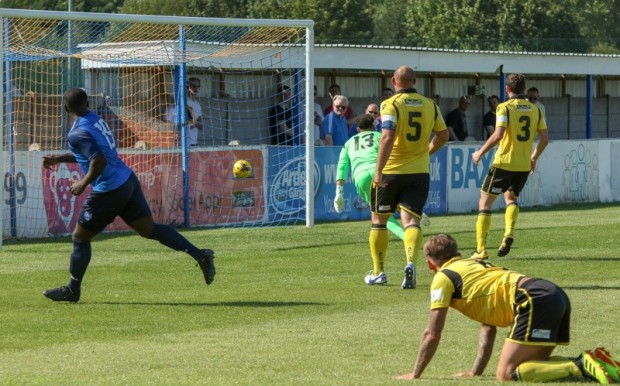 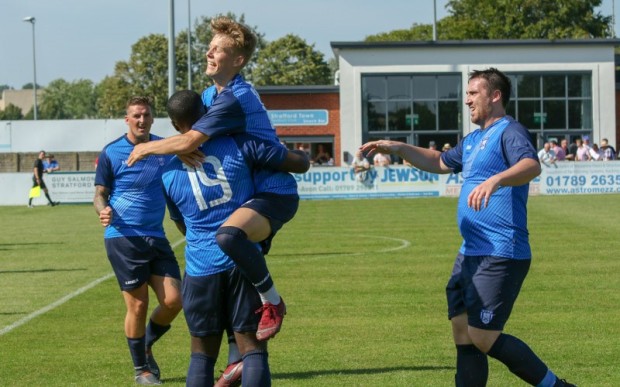 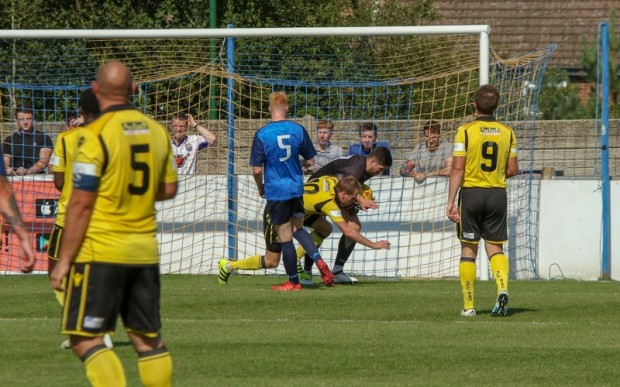 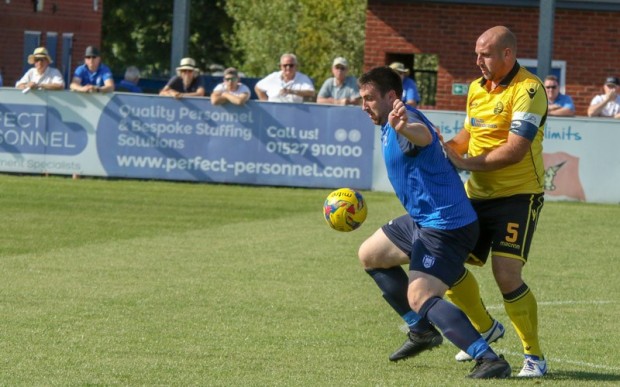 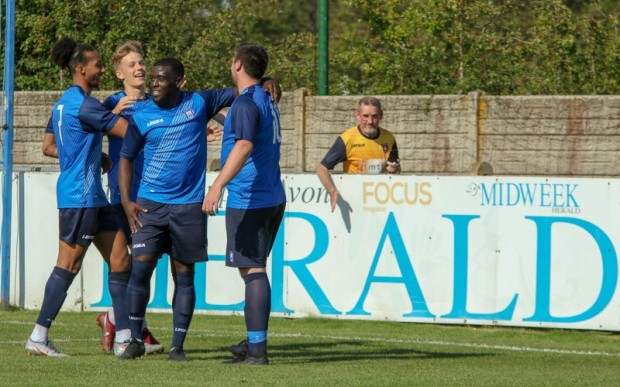 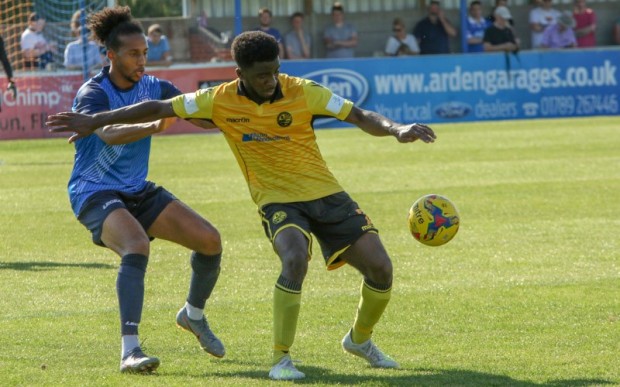 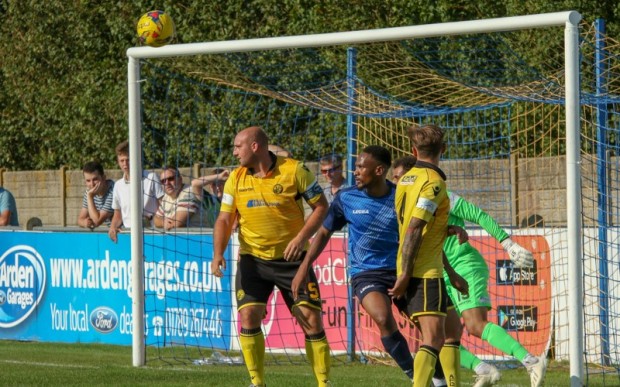 “the team changes had the desired effect ”  beamed a hugely satisfied Tommy Wright after seeing his new look side end the Diamonds 100% start to the season.  “But it was a lot to do with the opposition as well.

They arrived with three wins from three games and nine goals scored with only one against and when you’re top of the table you’re a sitting duck for everyone else.

So it was an easy team talk for me  –  if you are as good as I think you are just go out and show people   –   and they did just that.

And it was the ideal opportunity to unleash Chris Wreh.   Nabil didn’t train on Thursday due to a slight groin problem, and Chris has been patiently waiting for his chance, but Callum Ball came off injured today so depending how Callum is on Monday Nabil could well come back straightaway.

The change in goal also worked out well.   Both keepers have different qualities and Elliott has come in today and given us a different dimension.  He got within a couple of minutes of a clean sheet and his distribution has been excellent.    We need competition throughout the squad and we knew in pre-season that Sam and Elliott would go toe to toe for the shirt in just the same way as Chris  and Nabil are competing  at the other end of the field.

Finally Kynan Isaac.    He has decided to switch to North Leigh and I’m disappointed and feel a bit let down if I’m honest, but he’s made a career choice to play at a lower level and if that’s what he wants to do then so be it.”