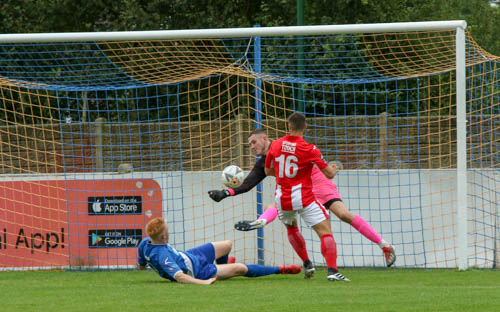 Town’s five match winning run in their pre-season schedule was ended by a quality performance from Brackley Town at the Arden Garages Stadium on Saturday.

The Saints had fought out a goal-less draw with Banbury United a week ago and fielded virtually the same line-up here, but inspired by a Man of the Match display from the former Sky Blue Carl Baker they proved too good for Town as boss Tommy Wright readily admitted afterwards.

And it was soon clear that Town were in for a testing afternoon as Brackley started brightly and went ahead in only the fifth minute. Baker wriggled into the penalty area down the left to see his shot deflected behind and when Shane Byrne floated over the resulting corner the ball fell to Gareth Dean some 15 yards out who promptly fired past the helpless Sam Lomax.

Brackley were bossing the possession with Byrne shooting straight at Lomax from 20 yards out followed by a deep Baker cross from the right reaching Jimmy Armson who prodded it past the post.

Luis Morrison and Lewis Wilson both had half chances for Town but it was the Saints who continued their National League North pedigree with ex-Coventry City midfielder Baker showing his class on the ball as the Town defenders struggled to close him down.

Town managed two corners in the closing minutes of the first half, but almost fell two down in the last action before the break when another Byrne right wing corner was headed over by Dan Holman who had replaced the injured Ndlovu on the half hour mark.

And the Saints missed another chance go two up as soon as the second half started when Matt Lowe’s cross from the right reached Armson at the far post who again put it wide.

Town had made three changes at half time, and Brackley followed with four of their own in the 56th minute with Tendai Daire immediately involved heading inches wide and then similarly not far away with a decent effort from distance.

As in the Aston Villa game last week James Hancocks provided Town with an extra attacking threat with his tantalising set piece deliveries and also showed the defensive side of his game with a perfectly timed tackle to snuff out a dangerous run from the speedy Daire.

Byrne then hit a dipping free kick narrowly over and Tom Fishwick blocked a fierce drive from Holman as Brackley maintained their grip on the game before Town made a further five substitutions with ten minutes to go.

Luke Fairlamb had a well struck left footer from the edge of the penalty area pushed away by Lomax at full stretch and the Town keeper then made a tremendous double save in the 89th minute deflecting a Holman shot against the bar and then recovering quickly enough to push away Daire’s follow-up attempt.

But Lomax was beaten in the final minute when he beat away another Daire effort only to Holman to react before anyone else to blast the loose ball into the roof of the net and round off an afternoon when the eventual result was never really in doubt.