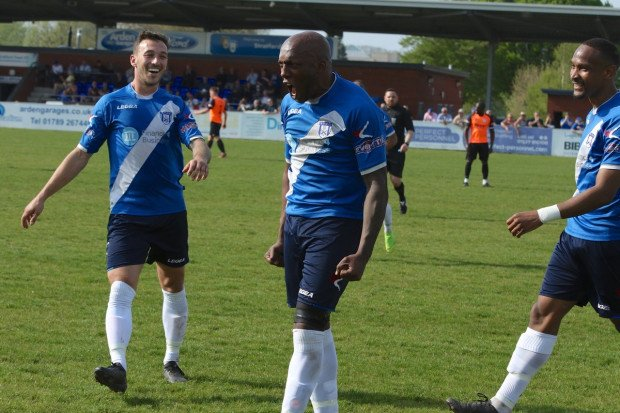 Exactly a week after confirming that Will Grocott had become a Glassboy Stourbridge have followed up by announcing today (Sunday) that Mike Taylor has also made the same move.

Hugely popular among the Town faithful and revelling in the nickname of “the Beast” Mike joined Town at the start of the 2016/17 season from Redditch United and made 32 appearances scoring 11 goals.

The following campaign saw him add 13 goals in  48 games, but he reserved his best for last season when in spite of switching briefly to Tamworth and then Leamington halfway through he ended as Town’s top scorer with 20  from 39 appearances which included 11  from the subs bench.

Probably his most memorable strike was his 94th minute winner against South Shields which propelled  Town into the First Round Proper of the F A Trophy for the first time ever, while his final goal gave Town a half time lead came in the play off match at Kings Lynn before the Linnets hit back to win.

Town may have had more technically gifted strikers but surely never any with a bigger heart, and he leaves with our thanks for all his tireless efforts in a Town shirt.