With other results also going in Town’s favour it was a thoroughly satisfied Thomas Baiilie who reflected on another three point haul at Bedworth.

“That’s four wins in our last five games and we are looking good for the playoffs” beamed the Town boss.  “Although already relegated Bedworth gave us a tough battle this afternoon especially in the first half and at half time we said that we would just have to be patient and the goals would come.

Once we went ahead straight after the restart we could have gone on to score five or six, but we’ve hit the bar and their keeper has pulled off a couple of top class saves.

Another positive is that we’ve kept a clean sheet and that’s great for Ross Etheridge as he will be our keeper from now on.  We thought that we had Laurence Bilboe for the rest of the season but he was recalled by Rotherham United at 3.30 pm on Thursday which gave us no time to bring anyone else in.

But overall it’s been a good afternoon and I’m as happy as can be !” 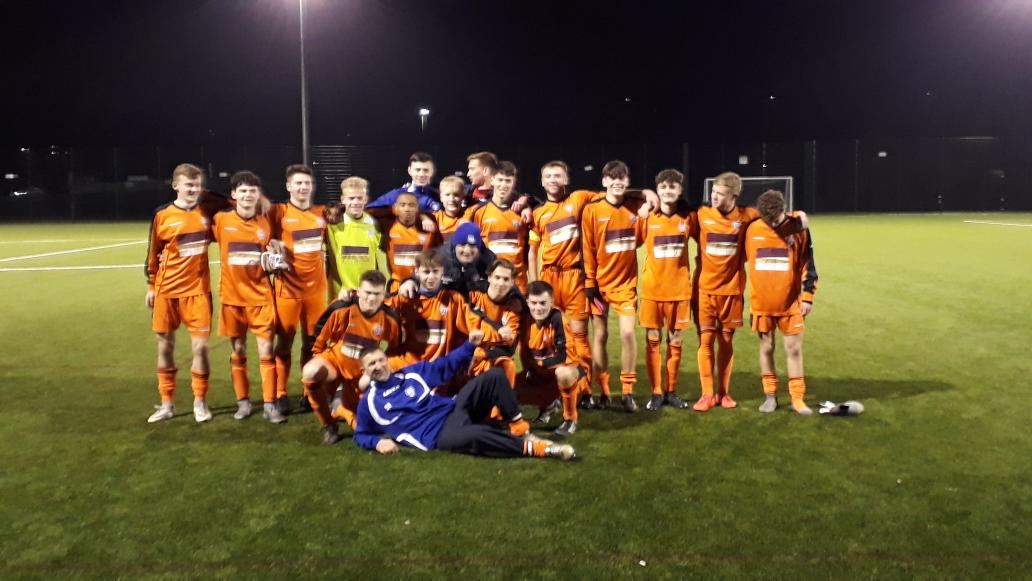 Town Youth stormed to the MFYL Premier Division South Championship with three games still to play and they did so in style with a thumping win against Worcester City at the Dell Stadium on Monday evening.

Two first half strikes meant that they already had one hand on the trophy at the interval and two further goals either side of a consolation effort from Worcester made it a night to remember for Darren Timms and his exuberant and talented squad.

Knowing that a win would secure the title Town pushed forward straight from the kick off and Worcester keeper Sean Dayus was soon in action saving from both Tommy Harrington and Bradley West in the opening quarter of an hour.

It wasn’t all one way with Joe Clarke going close for Worcester but Town continued to press and went ahead in the 23rd minute when West latched onto a pinpoint through ball from Harrington to surge through the Worcester defence and fire beyond Dayus.

Worcester responded with Town keeper Ryan Woodward forced into a couple of smart saves while a shot from Matt Patrick-Rivers came back off the post before Town doubled their lead five minutes before half time.

Dayus saved with his legs to prevent Town going three up early in the second half but a third Town goal was only delayed and on 65 minutes Tyricke Richards-Burke squared the ball across from the right and Harrington put the result of the game and the destination of the championship beyond doubt with a typically assured close range finish.

Patrick-Rivers pulled one back for Worcester with twenty minutes to go but soon after Harry Hartin made it 4-1 with the best goal of the evening as he curled a sumptuous free kick into the top corner from 30 yards out.

From then on all the pressure was off and Town were able to see the game out until the final whistle when the celebrations could really begin.

The winner of the March lottery draw £100 prize was Margaret Hale. Congratulations Margaret. A full list of monthly lottery winners and details of how to join can be found at https://stratfordtownisa.com/stisa-lottery/

We were poor for the first ten minutes, but from halfway through the first half we started to play. From then on I felt that we matched them for long periods, and at half time I genuinely believed that we could get something out of the game.

But we then dropped off again towards the end, and Michael Gash has come up with a quality finish to clinch the points.

He is a top player who quite simply ran the game this afternoon and Kings Lynn are where they are in the table for a reason as are we.

It is obviously disappointing to lose and we now need to regroup.  Bedworth next week is a game that we will be expected to win but now that their relegation has been confirmed there will be no pressure on them and that will make it more difficult for us

But everyone’s fixtures will be difficult, and if we can win three of out remaining six then I’m confident that we will be in the play offs.”

The Linnets scored early and late to extend their winning run to seven out of their last nine outings.

It seems a long time since Town beat Kettering in a penalty shoot-out to advance into the semi finals of this competition but at last some progress is being made.

The Southern League have today announced that Royston Town have been expelled for fielding an ineligible player in their third round tie against Lowestoft Town and accordingly Lowestoft have been reinstated.

Apart from Town the other teams already through to that stage are Blackfield and Langley and Cinderford Town.

Town Youth are within touching distance of the MFYL Premier Division South title after securing a hard earned point against a resolute Lye side at the Arden Garages Stadium on Thursday evening.

There may have been no goals but there was plenty of goalmouth action, and when news came through afterwards that Gloucester City had lost to Rugby Borough Juniors a quick calculation showed that Darren Timms’ battlers only need three more points from their remaining four games to be confirmed as champions.

Since a managerial change at the turn of the year Lye are much improved and Town knew that they were in for a tough evening as the Black Country side piled forward straight from the kick off.

Inside the opening five minutes Ash Ademi fired narrowly over followed by Aaron Bishop having a fierce effort blocked by Sacha Everard and then Olly Buchanan shooting straight at Town keeper Ryan Woodward.

Town responded with leading scorer Tommy Harrington seeing his well struck right footer beaten away by Lye keeper Ryan Pratt, but Lye were looking the more threatening of the two teams and on 20 minutes Dan Sutton cut in from the left let fly with a shot that was parried by Woodward with Town skipper Josh Aspinall-Smyth being in the right place to complete the clearance.

Then around the half hour mark Town then enjoyed their best spell of the game so far. Firstly Tyricke Richards-Burke latched onto a long ball but dragged his shot wide with only Pratt to beat followed by Harrington having a close range attempt cleared off the line by Jay Rossiter and then Caine Elliott surging through the middle to lay on another chance for Richards-Burke whose goalbound effort rebounded away off a defender.

But there was no let-up in the pace as Lye finished the first half on the attack. Only Woodward’s outstretched leg prevented Bishop from opening the scoring in the 37th minute and the Town stopper then had to pull off two more smart saves from Buchanan and Ademi to keep it all square at the break.

Lye had the first opening after the restart when Sutton crossed to Buchanan whose shot was deflected behind, but Town now began to show their quality and create the better of the chances.

On 62 minutes a Bradley West shot was somehow kept out by Pratt at point blank range and a few minutes later Richards-Burke whipped in a cross from the right which reached Harrington who was promptly crowded out before he was able to make room for the finish.

With a quarter of an hour to go Ademi fired wastefully over and five minutes later Lye could have nicked it when Bishop lifted the ball over the advancing Woodward as the keeper came out to meet him but again Aspinall-Smyth was there to tidy it all up.

In between Harrington had fired in rasping drive which was capably dealt with by Pratt and the draw which both sides thoroughly deserved became a certainty when Town substitute Toby Scott hit the final chance of an entertaining and exhausting evening straight at Pratt with just a couple of minutes left.

But Town now have the chance to clinch the title on Monday evening when they travel to face Worcester City. A win there and the celebrations can begin.

This season has 5 ½ weeks to go (plus play-offs) and I thought I’d set out the situation in our division together with the formulae for ultimate promotion to the National League North & South – hopefully involving the “boys in blue”. Many of you may already be aware of it all. However, it does not hurt to look forward as well as back with reports and photos

First up, after the last league games on 27 April, are the Southern  Premier League Central play –offs, where  2nd  – 5th have one-off games for semi-final and final (2 home to 5, 3 home to 4 with winner of former home in final.

As there are only 6 places available for promotion to National Lesage North and South (3 to each) from the four premier divisions, only the champions get automatic promotion. Of no consequence to Town, presumably Northern League and Southern Central go to North and Isthmian and Southern South go to South. Of more interest to Town, the four runners up play in 2 one-off games to decide the last two promotion places (“Super Play Offs”) – geographically decided by the FA-with the highest goal: game ratio team at home.

So the road is still long and hard. I am looking at Stourbridge realistically being 2nd, Biggleswade drifting out of contention, thus leaving 3 from a likely 5 vying for places for places 3-5. The remaining fixtures for the contenders are shown in the below Excel spreadsheet link (home left, away right).

One would say Coalville have the easiest, yet most, fixtures to grab one slot (although current form is not good) and Town and Kings Lynn, with points in the bag, to seize the other two. However I am making no predictions here in the aforementioned – just observations!  Certainly this Saturday’s encounter at Knights Lane is a most vital match for both teams, with KL in the better recent form of the two.

Hold onto your hats for the bumpy road ahead and let’s hope we do finish in the play-offs with possible mouth-watering home games providing potential upward movement, STFC matchday money and fantastic STISA 50/50 income !