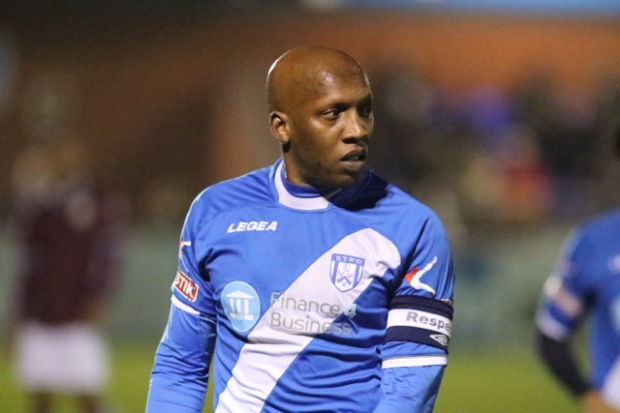 Brought to Town by Carl Adams in the summer of 2016 Mike made his debut from the subs bench in the 2106/17 season’s opening game at St Ives. Coming on in the 65th minute with Town 1-0 down he took just five minutes to notch the equaliser, but after only three games he opted to return to Redditch United.

Soon realising it was not the best decision he had ever made he was back at Town by the beginning of November and made his second debut against in a Southern League Cup tie against Leamington. This time he was in the starting line-up and opened the scoring in the19th minute as Town went on to win 4-0.

But he struggled to hit the target at the start of last season going without a goal in his first 15 appearances (7 starts and 8 as a sub) until he rediscovered his scoring touch in the home League match against Dunstable Town when he broke his seasonal duck in the 26th minute and then incredibly stormed to the second hat-trick of his Town career before half time.

He went on to clock up 48 appearances (which included 12 from the subs bench) with his 13 goals taking him into second spot in the Town’s goalscoring charts behind a certain Ben Stephens.

But with the Town supporters loving his hustle and bustle in the style of an old fashioned centre forward he has really relished his lone striker role this season with 12 goals already from his 20 games.

All of that suggests that his third Town campaign will be his best yet, and if so no-one will deserve it more than this big hearted number 9.