The following photo’s are shamelessly pinched from Alan Righton’s Facebook post on the Stratford upon Avon forum. The match pitted Town against Pegasus, one of the finest amateur sides of their day made up of students from Oxford and Cambridge University. The match was played at Pearcecroft the home of Stratford rugby club, presumably because of a higher capacity, but we know little more. Can anyone remember the match or recognize any of the names on the team sheet.? 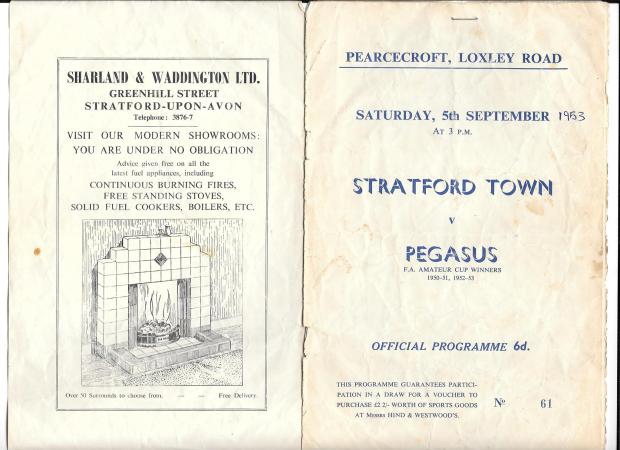 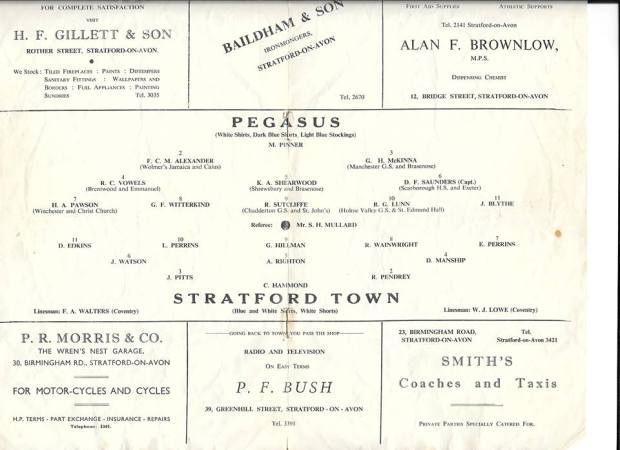 Tonight’s home league match versus Hitchin has been postponed due to a frozen pitch.

Just a reminder that our first Members meeting of 2018 has been booked for tomorrow Monday 26th February at the Youth Hostel Association, Hemmingford House, Alveston CV37 7RG from 8pm. Directions to the venue are as follows – drive through Tiddington past the War Memorial, next left into Church Lane and the YHA car park is on the left. Bar and other facilities are available. We apologise for the change from our usual venue and the late notice of this meeting.

Please do try and make it if you can. As you may have seen from the emails the STISA committee have been working hard on implementing the car park repairs project and there are several interesting developments to report to members.

The winner of the February lottery draw £100 prize was Olivia Kiff. Congratulations Olivia.  A full list of monthly lottery winners and details of how to join can be found at  https://stratfordtownisa.com/stisa-lottery/

A Lee  Thomas goal in the 48th minute gave town all three points at Privett Park.

“A tremendous performance from the lads” beamed Nick Ballinger as a last minute opportunist strike from Tyrike Richards-Burke propelled Town Youth into the semi finals of the MFYL League Cup after a closely fought fifth round tie against a hard working and well organised Newcastle side at a bitingly cold MoodChimp Stadium on Thursday evening.

Town went close to taking the lead in only the third minute when a looping header from Dan Atkins landed on the roof of the net, but as both sides settled down there were few clearcut chances at either end.

George Dawson fired over after cleverly making room for a shot as he worked his way in from the right half way through the first half and a Josh Aspinall-Smyth free kick was unconvincingly pushed away by the Newcastle keeper, but with both defences on top the interval was reached with the game still goal-less.

Only a stunning save from Archie Donaldson prevented Town from falling behind immediately after the restart as he took off to his left to push away a header from the Newcastle centre back which was destined for the top corner.

But as in the first half two evenly matched and committed sides were cancelling each other out and it soon became clear that one goal would probably be enough to win it.

With twenty minutes to go another Donaldson save after a scramble in the Town penalty area kept the scores level before Town began to pile on the pressure in the final quarter of an hour.

Both Bradley West and Harry Hartin – who arrived at the game immediately after returning from a winter sport break in Bulgaria –  went close followed by the Newcastle keeper reacting brilliantly to tip over a bullet header from Sacha Everard.

But into the closing minutes and with no extra time scheduled it seemed certain that a deciding penalty shootout would be needed until with less than 30 seconds remaining West latched onto a through ball down the middle to go clear on goal.

Forced out wide as the keeper came out to meet him West admirably kept his composure and squared the ball across to Richards-Burke who fired it past a covering defender on the line to spark wild Town celebrations while a dejected Newcastle barely had time to kick off before the final whistle sounded.

A late free kick from  substitute Ben Wright won the game for Basingstoke.

Its’ not often an ex Stratford Town player shakes the footballing world but it’s fair to say that Will Grigg did just that when netting the winner in Wigan Athletic’s shock FA Cup winner against runaway Premier league leaders Manchester City. Will signed for Town back in September 2007 and made his first team debut in a 0–0 FA Cup qualifying draw versus Hednesford Town on 15th September. He started the replay and was substituted after 58 minutes. Grigg scored in a league match versus Biddulph Victoria on 29th September and again versus racing Club Warwick  on 7th October. The following summer he signed for Walsall.

Former Town loanees Wayne Thomas and George Forsyth are now spearheading Worcester City’s promotion push in the Midland Football League Premier, and several other former Town players are also plying their trade in the same division. Former captain Joe Halsall is turning out for Coleshill this season alongside Rob Evans, Luke Edwards and Luke Barlone, whilst forward Jamie Molyneaux has recently swapped Hereford based Westfields for Highgate United.  Meanwhile Richard Gregory has joined Bromsgrove Sporting and found the net 17 times in 13 games at the lower level after brief spells with Leamington and Stafford Rangers. Charlie Faulkner netted on Saturday for Coventry Sphinx in a 2-1 over Loughborough University, the Sphinx line up also including Chris Sterling. City rivals Coventry United meanwhile have former Town custodian Richard Morris between the sticks. 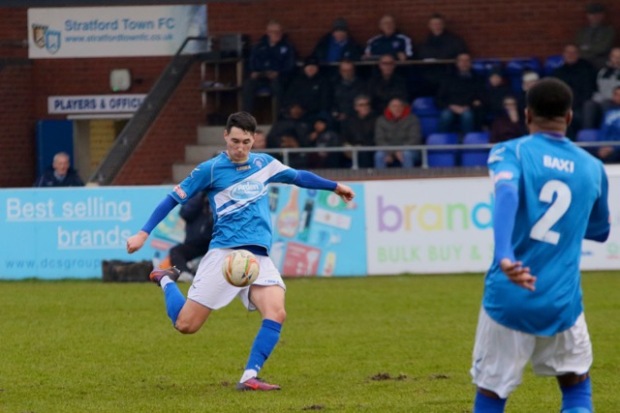 Former midfielders Josh O Grady and Josh Holford are also playing in the Midland League. O’Grady was on target in Racing Club Warwick’s 2-1 win over Coventry Copsewood on Saturday in Division 1, whilst Holford is with Coventry based Division 3 leaders GNP sports.

Our first Members meeting of 2018 has been booked for this coming Monday 26th February at the YHA, Hemmingford House, Alveston CV37 7RG from 8pm. Directions to the venue are as follows – drive through Tiddington past the War Memorial, next left into Church Lane and the YHA car park is on the left. Bar and other facilities are available.

Following their League Cup Fourth Round win at Malvern last week Town  Youth will now face Newcastle Town in the Quarter Finals at the MoodChimp  this Thursday (February 22nd) with a 7.45pm kick off.

The League fixture against Hereford originally scheduled for that date will now be played  later in the season.