In order to keep the site alive and kicking during the summer we are reproducing a series of Match Reports from significant Town games over the past few years which hopefully will rekindle some favourite memories.

To start with we go back to the end of the 2010/11 season which saw Town lift the Polymac Services League Cup to crown a successful first campaign in charge for the popular Morton  Titterton.

And a familiar name in the Boldmere line-up is that of Simeon Tulloch who is now Town’s longest serving player  –  such is football !! 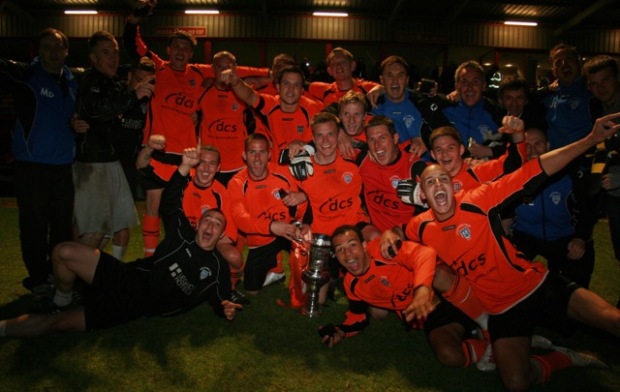 Town really turned on the style at the Bescot Stadium on Tuesday evening as they outclassed  a strangely subdued Boldmere St Michaels side with a scintillating display to lift the Polymac Services League Cup and round off a hugely impressive first season in charge for rookie manager Morton Titterton.

Arguably the Mikes went into this game as favourites as they had  finished their Baker Joiner MFA campaign by winning their last eight games  –  a sequence which earned them the Moldwell Products Team of the Month Award for April and which enabled them to snatch third spot in the final table two places and two points better off than Town.

But they were never in this game with a realistic chance after Sam Alsop had fired Town ahead early on, and further strikes from Alsop and Man of the Match Mykel Beckley effectively put the result beyond doubt before the interval.

Town’s starting line-up showed two changes from their last League match against Rocester ten days ago.  Joss Holford replaced the injured Danny Haynes at right back, and with Danny Carter cup-tied Beckley moved inside to partner Martin Thompson up front and Rob Thompson-Brown  –  making probably his last Town appearance having been offered a professional contract at Kidderminster Harriers  –  returned to his normal wide left role.

Both teams wore black arm bands and there was an impeccably observed minute’s silence before the kick-off in memory of Ricky Smith who had close connections with both Clubs and who had sadly passed away three weeks earlier aged only 53.

Oddly in view of what was to come it was the Mikes who made the brightest start with Hawker not far away with a useful effort from distance in only the second minute, but as soon as Town settled down there was only one team in it, and they took the lead in the 11th minute.

And appropriately it was Town’s longest-serving player Mark Faulds who began the move by driving into the penalty area from the right and when a defender came across to challenge the ball broke loose to Alsop who drilled it low past Mikes keeper Sean Butler from 20 yards out.

With Alsop  –  making his 50th appearance of a busy season and who has really blossomed under Morton Titterton’s management  –   and the experienced Stuart Herlihy now bossing the vital midfield possession Town piled on the pressure.  A Thompson-Brown shot was comfortably held by Butler who was then relieved to see a long range attempt from Holford fly narrowly wide, and it was fully in keeping with the play when Town doubled their lead as the half reached its midway point.

Again it was down to Alsop’s alertness as he seized on to a sloppy clearance just outside the penalty area to hit a first time shot which initially didn’t seem to have enough power behind it, but Butler was slow to react and the ball crept past him into the net just inside his left hand post.

The Mikes tried to respond, but skipper Liam Reynolds and the immaculate Andy Gregory were unruffled in the centre of Town’s backline and keeper Richard  Morris was having an easy time of it as most of the action took place at the other end.

Thompson wasn’t giving the Mikes defence a moment’s peace with his typically selfless running while Beckley’s pace was a constant threat as shown on the half hour mark when he latched on to a long ball from Tom James down the left to scoot past Lyndon Weller and square the ball across to Thompson who was inches away from reaching it at full stretch.

By now the Mikes were simply hanging on and probably hoping for half time, but five minutes before the break they went three behind, and bizarrely this time the goal stemmed from a Mikes free kick on the halfway line.  Headed clear by Gregory the ball was picked up in the centre circle by Beckley who promptly sprinted between the static Mikes defenders to race clear on goal and as Butler advanced to meet him he admirably kept his composure to slot it past him and surely take the game out of the Mikes reach.

And it could have been even worse for the beleagured Mikes in the closing minute of the half when they conceded a free kick on the edge of the penalty area and Thompson-Brown’s effort fizzed inches over with Butler beaten.

If the Mikes were to get back into the game they needed a positive start to the second half, but after Morris had safely held a couple of hopeful crosses it was Town who resumed control, and the tireless Faulds  –  who was giving his usual 110%  –  soon went close when he let fly from 25 yards with a dipping effort which Butler did well to tip over.

And if it was not already “game over” it certainly was with a minute under half an hour left when Town added their fourth after forcing a corner on the left.   Thompson-Brown played it short to James who advanced into the penalty area to shoot across Butler into the far corner although again there had to be a question mark about the speed of the keeper’s reactions.

It was now desperation time for the Mikes and they immediately sent on all three of the permitted substitutes, and although Tom Overfield injected a bit of much needed pace into their attack it was Town who remained well on top.

Chris Murphy came on for the tiring Holford who had done a sterling job as Haynes’ deputy and slotted into midfield with Faulds dropping into the backline and it was almost exhibition stuff as Town imperiously sprayed the ball about the wide open spaces of the Bescot with Thompson-Brown and Beckley running the Mikes defenders ragged.

With 20 minutes to go Beckley’s pace took him to the byline and his pass inside looked to have set up a hat-trick opportunity for Alsop, but although he hit it well enough it was blocked on the line by Liam Morrall.  Shortly after Nathan Edgington came on for Thompson and promptly made an opening for Thompson-Brown whose rasping effort was charged down and then a Beckley cross from the right caused mayhem in the Mikes six yard box before Murphy’s shot was somehow deflected behind.

But to their credit the Mikes kept going and Tom Law missed their best chance of the evening so far when he inexplicably headed a Hawker cross wide from close in.  And a minute later the Mikes pulled a goal back when Lyndon Weller threaded the ball through to Overfield who ran on to shoot past Morris with the minimum of fuss.

Surely this was to be only a consolation goal, but four minutes later the Mikes scored again when Hawker’s speculative effort came back off the bar and Law hit the rebound past the stranded Morris.

Suddenly there was a degree of  apprehension among the large contingent of the Town faithful in the crowd of 493 and there were some anxious glances to the electronic scoreboard as the remaining minutes seemed to take an age to count down.

But on the pitch the players seemed much less concerned and they made sure that the Mikes  didn’t really create any more meaningful chances.

And deep into the three minutes added time Town could have had a penalty when Edgington was flattened by Donaghey only for the referee to give a free kick right on the edge, but at least this allowed Town to play it short and retain possession by the corner flag until the final whistle sounded and the celebrations could begin

This had been an exhilarating Town performance and definitely a night to remember for all their supporters who had braved the horrors of the M6 to make it to the Bescot.

But surely the person to whom most of the credit should go is Morton Titterton.   Speaking after Town had beaten Westfields in the Semi-Final he indicated how much it would mean for him to win this Competition in his first managerial season as his last game as a player had been when Leamington had won the 2007 Final.

Well his wish came true, but few would have bet on Town winning anything when he took over from Rod Brown after that shambolic F A Cup defeat at Tipton   He inherited a squad short on fitness, confidence and morale and with the invaluable assistance of Jason Cadden and Paul Eden has reshaped it into a closely knit group who play a style of football that is pleasing to the eye and mighty effective too.

There were lots of smiles on lots of Town faces as skipper Liam Reynolds and his team were presented with the  Cup and their medals but none was broader than Morton Titterton’s.

“I’m absolutely delighted.  We were exceptional tonight and it was a brilliant win.  It’s great to collect a trophy in my first season, and more importantly than that it gives us a tremendous platform for next term when hopefully we can continue with the progress we’ve made so far.”